I was born in Cyprus, that small island in the Eastern region of the Mediterranean Sea, in a beautiful mountain region.

Just after my military service, I immigrated to Australia. It was in November 1968 when I arrived in Melbourne, having no more than a small suitcase with a few clothes and a lot of dreams. Not having any knowledge of the English language made this new life experience very difficult. After working double shifts and saving every cent, I managed to buy a small business, a little supermarket, that turn out to be quite successful. It was then when I decided to go back to school, being able to support the fees for part time attendance and follow my dream. I was always drawn towards therapies and methods to bring relief for human sufferance. It must have been an inheritance from my mother, who was the “witch” doctor of the village. I used to watch her, as a child, helping people with herbs and old remedies, assisting women in labor or “fixing” broken bones, so I felt it was my call to follow a similar path. 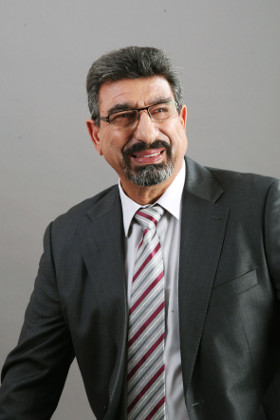 I first studied massage, then trigger point therapy, myofascial release and deep tissue therapies, as well as several energetic works (Reiki, Pranic healing, Universal healing, etc).
Afterwards I enrolled into Physiotherapy college and after graduation I established a clinic. I felt I was not offering my patients enough help, so I continued studying Traditional Chinese Medicine and acupuncture. After a while I also graduated a two years specialization in clinical hypnotherapy, but although I had good results and my clinic was very busy, I was still searching for more methods for better addressing my clients’ needs. In 1983, I was involved in a car accident and ended up in the hospital, with a fractured sternum and a severe whiplash. Eight hours later, I was released from the hospital with a neck collar and a few painkillers. My condition didn’t improve in time, on the contrary, I had to wear the neck collar all the time, I was having continuous migraines, the neck was stiff and many nights I couldn’t sleep at all. I found myself in the position of a patient, in great need of a treatment.
For the next five years I tried every medical method I knew, allopath, complementary or alternative, there was no distance I wouldn’t travel and I tried even many hocus-pocus techniques, but without obtaining a significant improvement of my condition. A very close friend of mine, who is an orthopedic surgeon, believed that the only answer to my problem was an operation, but I wasn’t ready to admit that despite my never-ending quests in the therapies sphere, no method could help me.
After 5 years of countless treatments and no results, the operation was starting to look like the only option left!

It wasn’t until 1988 when a client of mine suggested that I should see a Bowen therapist. I had never heard of this therapy before, despite all the research that I had done! Without any hesitation, I made an appointment for the next day. I was very keen on getting there and finding out more about this technique, especially since my client told me its core principle was: “to reset the body to heal itself.”

That was the most valuable principle I ever heard! All this time, I had treatments from practitioners who were forcing my body to do what they wanted, but for the first time, I received a logical solution and the more I thought about it, the better it sounded: “Reset the body to heal itself!”

When I got to my first appointment, I asked the practitioner how the technique worked. He answered that he didn’t know exactly, but for the last six months, all the patients he treated had great improvement. That was good enough for me. Of course, I was still very skeptic. When he started the treatment, I must admit I thought it was just another “hocus-pocus” attempt. It was a very strange procedure! He would touch me a couple of times, very light and gentle, nowhere close to the location of my problem, then walk out of the room for two – three minutes and then come back and do the same. Then, 35 minutes later, he said to me that was all for now and we’ll see each other in seven days!” I admit I wasn’t very keen on going back. It seemed so effortless!
The next 3 to 4 days I was feeling very strange, but to my surprise, my neck moved a little easier and on the fifth day was even better. So on the seventh day I kept my appointment and after three more treatments I was able to throw the collar away, my neck stiffness released completely, I was free of pain and migraines and most important, free of all that stress that was part of my life for the last five years.

Finally, after five years of searching, I found a technique that really worked for me!

A short while later I enrolled into the next seminar organized by the Bowen Therapy Academy of Australia. It was one of the first seminars Ossie and Elaine Rentsch organized in Melbourne and like every beginning, the course schedule was not yet well adjusted. I was feeling overwhelmed and quite unsecured of my skills acquired, but very keen to master this technique. I decided to follow Ossie and Elaine all around Australia and in the first year I attended the courses three more times. The more I learned and practice this technique, the better I realized it was the best therapeutic method ever!

I left aside all the other techniques and I started offering my clients only Bowen. I was, at some stages, running two clinics and there were times when I treated as many as 40 people in one day.
I had patients of all ages, some presented with muscular-skeletal disorders that I used to treat with the other modalities, with limited results. Their conditions improved much faster with Bowen and most of the time completely. I was always amazed though of the results obtained in many chronic, severe conditions, organic and even emotional and psychological problems.

In 1994 I was invited by Bowtech to join the instructors’ training program. It was a big honor for me, but when I was authorized to teach this technique for Bowen Therapy Academy of Australia, it never crossed my mind that I would be one of the very few teachers to spread this technique all over the world.
I started teaching in Australia, but my greatest wish was to be able to bring this fantastic technique in Greece and to my native country, Cyprus. It wasn’t until 1999, when I finally found somebody to gather a few students together in Athens, where I started the first course in February 2000. Since then, I started to travel around Europe, organizing presentations, performing demonstrational treatments, publishing articles and attending TV shows, to make this technique known. It was a full time job, involving a lot of efforts and frustrations, because living out of a suitcase and sleeping in another hotel every night is never easy. Every country has its own rules and regulations, people have different mentalities and perception of complementary medicine. I persevered though and managed to introduce the Bowen technique in 7 countries so far: Greece, Germany, Romania, Cyprus, Serbia, Bulgaria and the Philippines, set up permanent offices and practitioners’ associations, teaching over 4000 students and training 19 Bowtech instructors.

After so many years of practicing and teaching this technique, I am now more passionate about Bowen than ever before. I take pride in each of my student’s wonderful results, I refill my batteries with every happy patient and I truly believe Bowen changes people’s life. It sure changed mine!

This site uses cookies. By continuing to browse the site, you are agreeing to our use of cookies.

We may request cookies to be set on your device. We use cookies to let us know when you visit our websites, how you interact with us, to enrich your user experience, and to customize your relationship with our website.

Click on the different category headings to find out more. You can also change some of your preferences. Note that blocking some types of cookies may impact your experience on our websites and the services we are able to offer.

These cookies are strictly necessary to provide you with services available through our website and to use some of its features.

Because these cookies are strictly necessary to deliver the website, you cannot refuse them without impacting how our site functions. You can block or delete them by changing your browser settings and force blocking all cookies on this website.

These cookies collect information that is used either in aggregate form to help us understand how our website is being used or how effective our marketing campaigns are, or to help us customize our website and application for you in order to enhance your experience.

If you do not want that we track your visist to our site you can disable tracking in your browser here:

We also use different external services like Google Webfonts, Google Maps and external Video providers. Since these providers may collect personal data like your IP address we allow you to block them here. Please be aware that this might heavily reduce the functionality and appearance of our site. Changes will take effect once you reload the page.